From The Podium
Welcome to our From The Podium section. Here you will find pieces that are more opinion based articles – essentially rants about various goings on in the NFL that are mostly born out of rants at the television during game broadcasts. Whether it is who should be in the Hall of Fame, which stadium is the best to play football in, or simply which uniform is the better, if we have an opinion on it, you will find it here.

It is probably worth remembering that articles in this particular section should be taken with a pinch of salt as they are most often written from a tongue-in-cheek perspective, and very well may express opinions that don’t always stack up to scrutiny. It may be, that articles from this section will result in future more in-depth and balanced articles.

​So, in the words of Brian Billick, “The podium is mine!”

​“It’s Not Always The Player! Sometimes, It’s The Coach!”​ 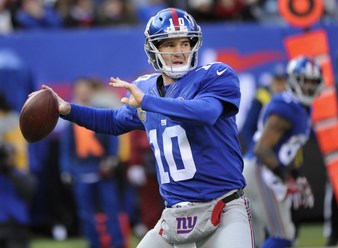 That quote was made during the 2010 season by Keyshawn Johnson on one of the NFL pre-game shows. Upon hearing of the benching of Eli Manning, they were first words that entered my mind.
You have to ask, what do the New York Giants as a football team have to gain from this move? The answer? Absolutely nothing... ​

We will get on to the apparent reasons that have led us, the audience, to have to endure some of the most atrocious uniforms since the short-lived days of the World Football League (WFL) of the 1970s and their florescent pants, color-coded to boot shortly, but the real trick the NFL is missing with their successful venturing out into midweek obscurity of the Thursday evening television schedule, is a chance to pay real homage to the rich tapestry of its own past.