That One Monday Night In Oakland

It is probably safe to say that (outside of fans’ personal favorites) a 41-7 blow-out at the end of the season, with one team going nowhere, no less, wouldn’t widely be regarded as a classic contest. However, when the Green Bay Packers and the Oakland Raiders walked off the field at Network Associates Coliseum in Oakland, California following their week sixteen showdown on Monday Night Football on 22nd December 2003, most people were aware – both those in the stands and those in front of their television sets at home - of the piece of football history they had just witnessed.

The performance by Packers’ quarterback, Brett Favre that evening, would have been widely praised in the sports pages the following day no doubt. The fact that it came a little over twenty-four hours after he received news of the sudden death of his father, catapulted it into the realms of living folklore. As an afterthought, the Packers remained alive for a playoff spot. 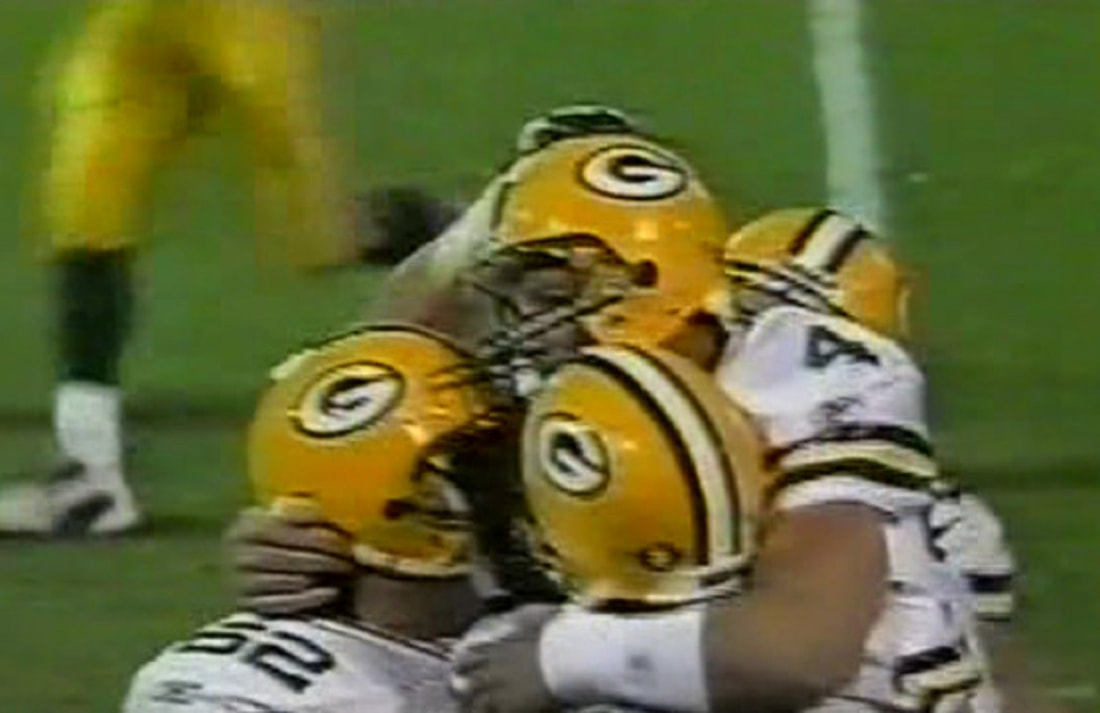 In the book, Gunslinger by Jeff Pearlman, the eventual stage is set in intricate detail. The away game preparations would begin like any other for the Packers that week. By the Sunday before the game, with the team checked into their team hotel (the Claremont in nearby Berkeley), as the rest of the NFL teams battled it out on gridirons around the United States, Brett Favre, kicker, Ryan Longwell, punter, Josh Bidwell, and back-up quarterback, Doug Pederson wondered around the green calmness of the golf-course. They were the only ones there.

On this particular afternoon, Favre had forgotten his phone (which sat in his hotel room), so when his wife, Deanna, received news of his father’s death, after not getting through to her husband, she telephoned Pederson, who was particularly close with Brett. It was his agonized face that first suggested there was devastating news for his friend. Then he handed him his phone to speak to his wife.

Deanna would arrange to get the next available flight to Oakland, while Brett was left to contemplate whether he played the following evening, or left for Mississippi and home.

​Incidentally, details of just what had happened were soon national news. According to witnesses at the scene, Irv Favre had come off the road in his pickup truck due to a massive heart attack. The time of the incident was 5:23pm (local time) and happened on Highway 603 near the Favre’s hometown of Kiln. A local women, Leslie Stevens, was driving behind Irv Favre’s vehicle at the time of the incident, and knew he was the father of the Packers starting quarterback. She would state to the media upon pulling her own car over and attending to Irv, “He had a pulse (and) he was breathing. But he wasn’t talking!” Although he would be rushed to a local hospital shortly after, he would be declared officially dead at 6:15pm – less than an hour after his truck came off the road. He was just fifty-eight years old. 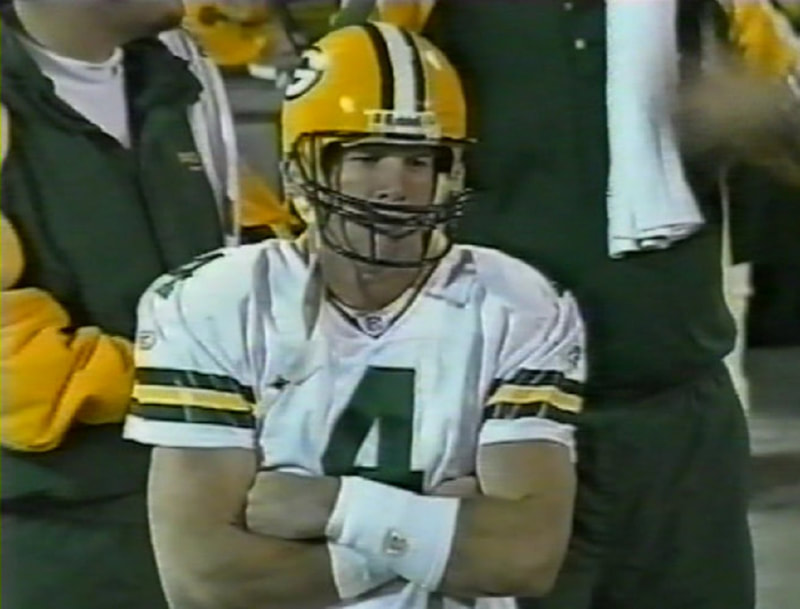 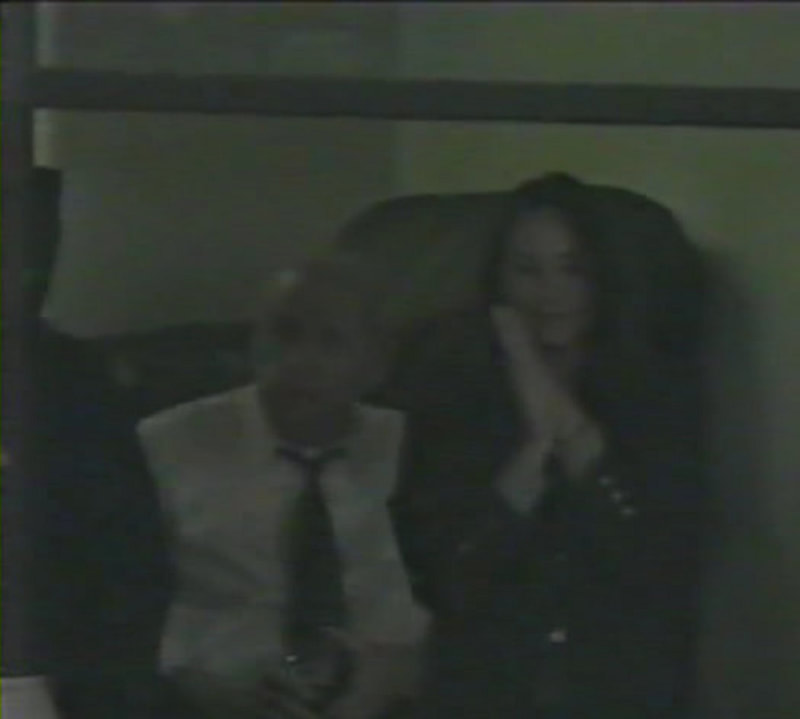 "If You've Ever Doubted My Commitment..."

​That evening, the Packers were to hold a team meeting in one of the hotel ballrooms to go through walkthroughs, and so head coach, Mike Sherman, could address the team. Only now, the message would be one much different to the one planned that morning. The players had been informed of the news, and most expected Brett Favre to already be on a plane back to Kiln. Instead, he entered the ballroom, and quietly asked Mike Sherman if he could speak directly to his teammates.

Starting tackle, Mark Tauscher, would recall in Gunslinger that “you could see how broken up he was, it was more than just football!” Wide receivers’ coach, Ray Sherman, would state in the same book how “nobody made a sound” and that “you could hear a pin drop!”

“By now y’all know what happened with my dad. And I appreciate coach Sherman giving me the option not to play. I really do. I loved my dad. I love football. I love you guys. I grew up playing baseball for my dad, and I grew up playing football for my dad. It’s all I know. It’s my life. I’m playing this game because I’ve invested too much in the game, in you, in this team, not to play. If you ever doubted my commitment to this team, never doubt it again!”

​And with that, the 8-6 Packers, with a quiet determination prepared to face off against the 4-10 Oakland Raiders for the chance to keep their playoff hopes alive. For the Raiders, there was no such dream. Less than a year after their Super Bowl defeat, they were considered one of the most disappointing teams of the season. After beginning a modest 2-2, they had lost eight of their last ten contests. On paper, Green Bay should handle the Raiders easily. On the field, off the back of one of the finest and most memorable individual performances by Brett Favre, they would completely take them apart. 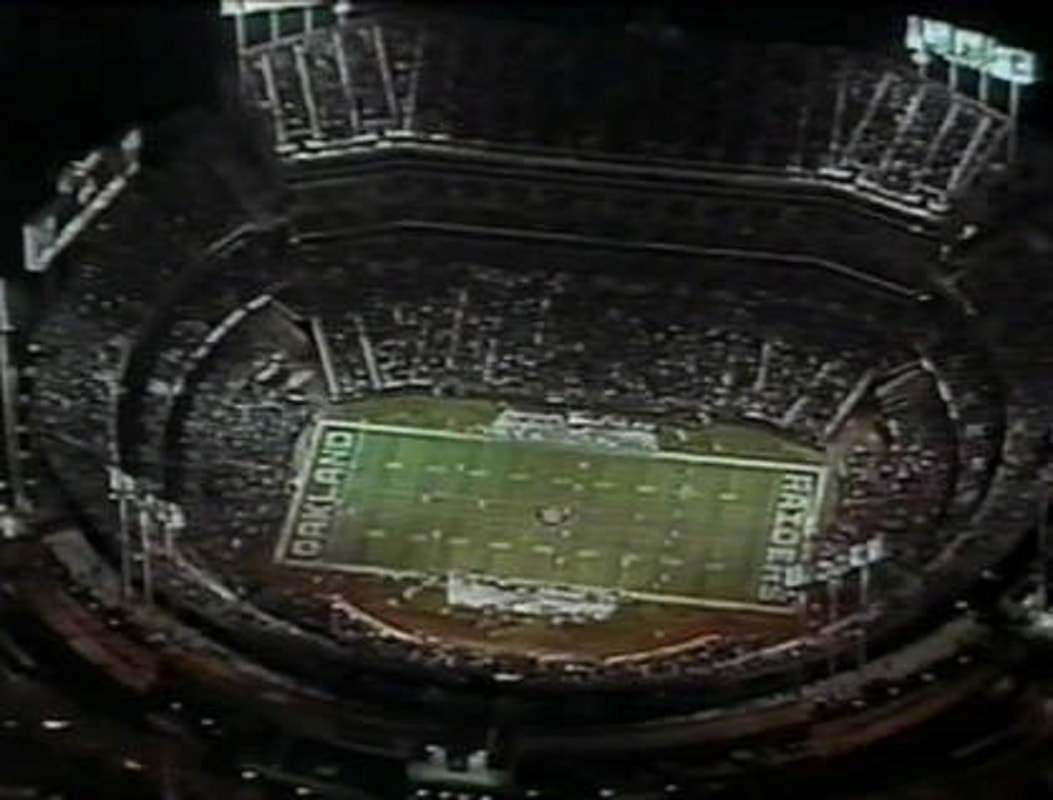 Lost in the pre-game talk (perhaps understandably), was the fact that Favre entered the game (as he had done now for some weeks) with a broken thumb. This was evident to those watching his pregame warmup throws (which by all accounts were wild and erratic – and not Brett Favre), as was the fact that he didn’t come out on to the field until only forty-five minutes before the kick-off. In short, there was no reason to believe what was about to happen, would happen. Perhaps the fact that the 60,000-strong Raiders’ crowd cheered Favre as his name was called during the player introductions (something unheard of at the Coliseum) should have acted as a sign of things to come.

The contest began as it would continue. Following the Raiders opening drive bogging down and ending in a punt, the Packers would take over. ABC commentator Al Michaels quipped, “So, Brett Favre will go to work!” Indeed he would.

Following several bruising runs by Ahman Green, Favre gave notice of what was to come, as he let the ball fly down the right sideline to wide receiver, Robert Ferguson, who scooped the pigskin out of the air to complete a 47-yard strike. Two plays later, Favre took the snap, rolled to his left before firing back to tight end, Wesley Walls in the back of the end zone for a 22-yard score.

The Packers were quickly up 7-0, Favre accepted inspired congratulations from his teammates, seasoned commentators who had seen it all looked on in amazement, and from high up in a private booth in the luxury boxes, Deanna Favre watched her husband with equal pride and concern. And this was merely the beginning.

It would be 14-0 shortly after as the Packers’ next drive ended when Favre fired a 23-yard laser of a pass to the right corner of the end zone to receiver Javon Walker. His statistics after the first two possessions read, six attempts, six completions, 128 yards and two touchdowns.

In between the joy of taking the lead and starting the contest almost perfectly, the TV camera would catch Favre momentarily “checking out” and (understandably) letting his thoughts wonder to his father and the emotional onslaught that the coming days would undoubtedly bring.

​The Raiders would manage to pull a score back when running back, Charlie Garner, found the end zone from 25-yards out, but that would be as close as they got.

A "Fantasy-Like" Performance For The Ages!

​Following a 31-yard field goal from Ryan Longwell to put Green Bay up by ten points, Favre found receiver, Javon Walker again, this time from 43-yards out, making the score 24-7. Before the end of the half, Favre would find Walker once more for another magical connection, this time for a gain of 46-yards. On the following play, tight end David Martin snared Favre’s fourth scoring strike.

By halftime, with the Packers leading 31-7, Brett Favre had completed 15 of 18 pass attempts for 304 yards and four touchdown strikes – and strikes is an accurate description. He would end the contest with a total of 399 yards off the back of 22 completions from 30 attempts. Also, lost in the emotion of the occasion, he passed Fran Tarkenton moving into second place on the all-time touchdown passes list (a record he would eventually set – ironically enough, while a member of Tarkenton’s old team, the Minnesota Vikings in 2009).

Perhaps Al Michaels summed it up best when he stated from the booth:

​“You bring this script to a studio and they throw it out. I mean this is like fantasy!”

​The second half was merely a formality, and while there was a noticeable “deflating” of “coming back down to reality” throughout the last thirty minutes of game time, Green Bay would add a further ten points with a 27-yard Ryan Longwell field goal, and a 7-yard touchdown run from Ahman Green, to make the final score a devastating, 41-7.

​Al Michaels would later tell Jeff Pearlman of when his father died he had:

“...a sinking spell feeling. You looked at Brett on the sideline and (you could see) he was having sinking spells. But somehow, some way, he would wrap it up and get back on the field!” 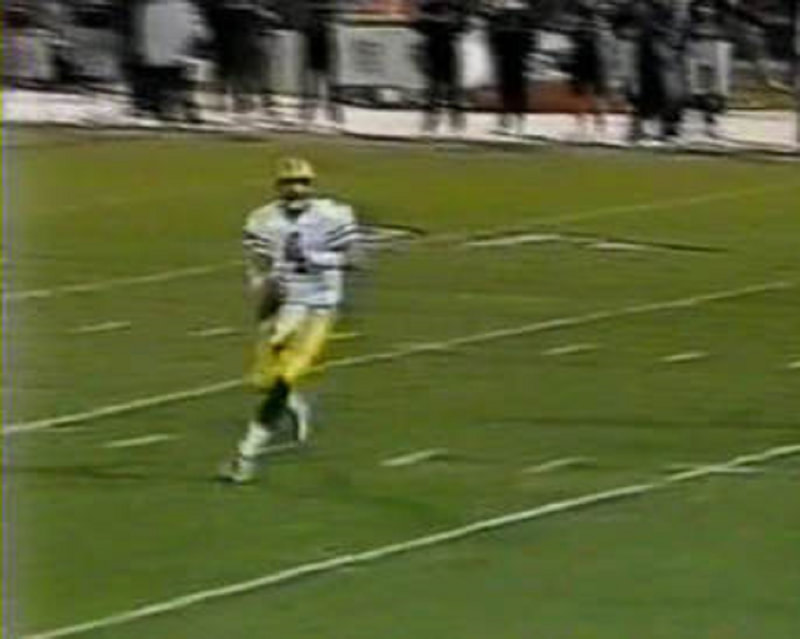 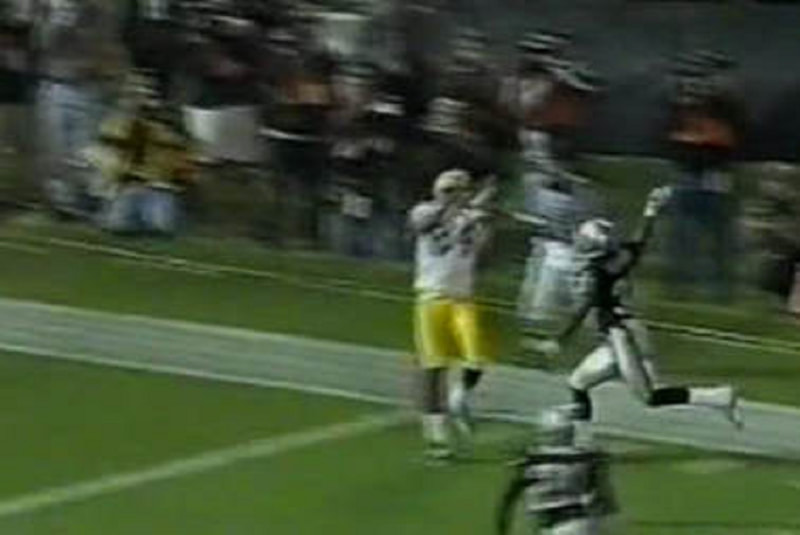 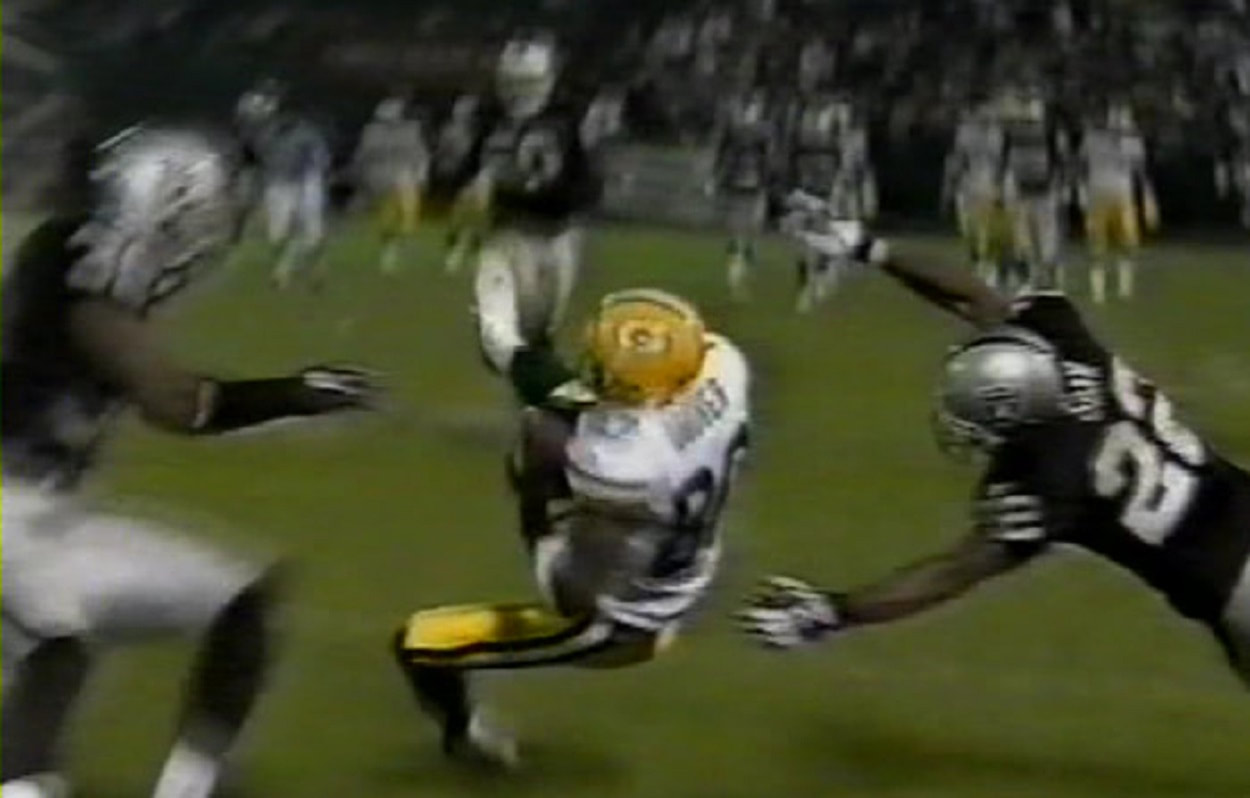 Favre’s passes were so precise, so magically placed, you could be forgiven for thinking if he yanked his arm back, the ball would rush back into his hand as if it were a yo-yo on a string. For their part, the wide receivers of the Packers were playing a level above their ability. Donald Driver, one of Favre’s closest friends on the team at the time, told author Jeff Pearlman that he gathered the wide receivers together before the kick-off and told them, “Anything he (Brett) throws we catch. I don’t care what it is. Behind us, over our head. If we have to get on a ladder, jump on the guy’s shoulder, we’re going to catch the ball!”

While the Raiders would lose their final contest, 21-14, to the San Diego Chargers the following week, and so completing a miserable 4-12 campaign, the Packers would hammer the Broncos, 31-3, to finish the year 10-6 and champions of the NFC North. A classic contest (in the more traditional sense) saw the Packers edge the Seattle Seahawks, 33-27, in overtime in the wild card round, before another overtime game in the Divisional playoff at the Philadelphia Eagles would see them on the wrong side of a 20-17 score line.

The 2003 season was a lost one for the Raiders, and one that fell considerably short for Green Bay. But that Monday Night Football game in Oakland, both in spite of and because of the surrounding events, is one of the greatest evenings in Green Bay history. And in a bizarre but comforting way, arguably one of the most memorable in Brett Favre’s career.

​Check out the videos below. It features various reports and memories of the game in question, and how Brett Favre dealt with the death of his father in immediate hours following the tragic incident. 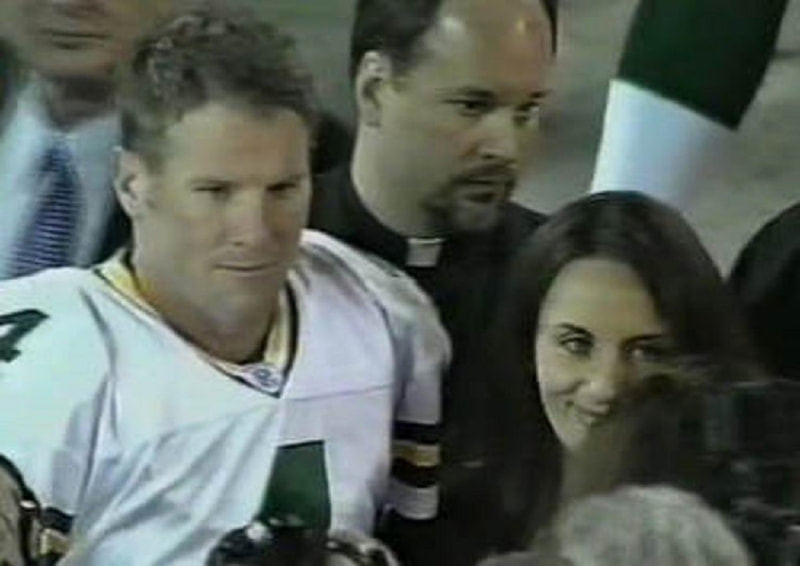 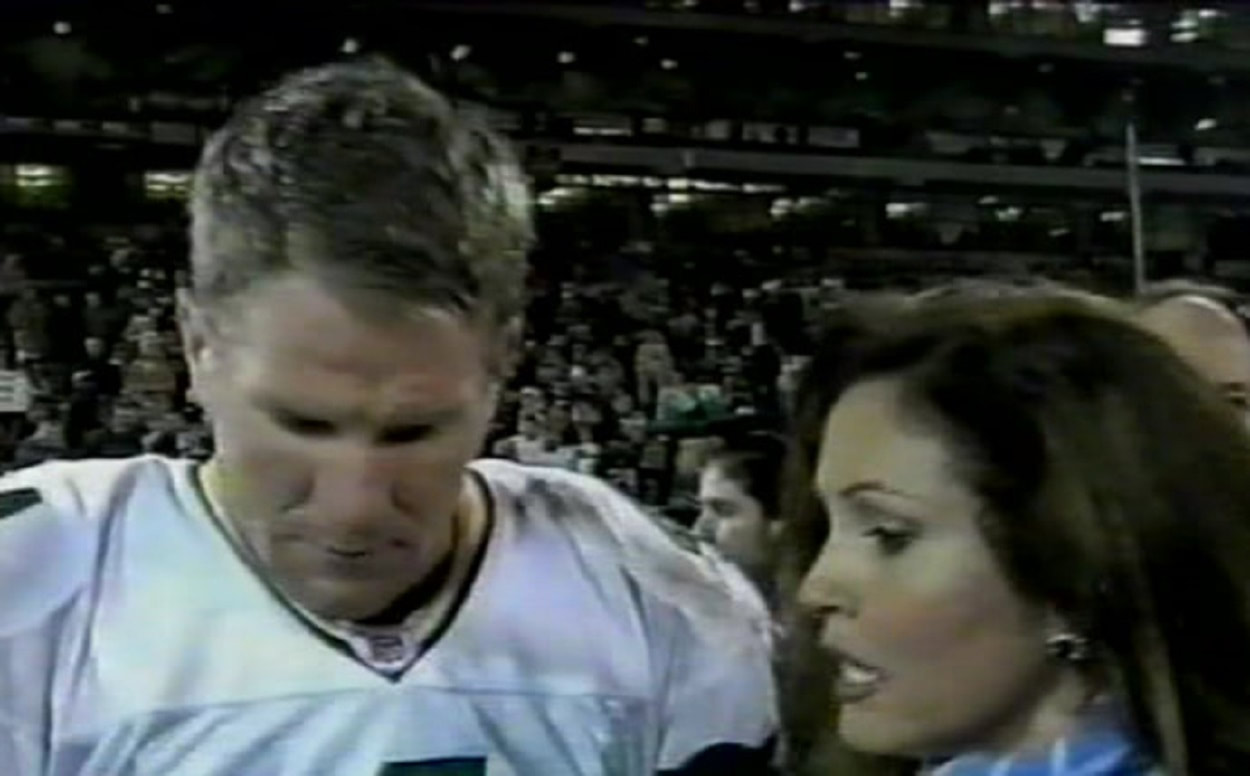