The Quarterback Duel That Shouldn’t Have Been!

The Detroit Lions and Cleveland Browns share two distinct pieces of NFL history in the twenty-first century. They have both managed to make it through an entire sixteen-game NFL season without winning a single game (Detroit in 2008, Cleveland in 2017), and on an unsuspecting Sunday afternoon in Detroit, Michigan, on 22nd November 2009, they faced off against each other and put on one of the finest NFL regular season contests of recent times.
​
Perhaps this feat is even greater considering each team entered the week 11 contest with a 1-8 record, each with their seasons respectively over, and each several years away from even limited success. But for those sixty game minutes, and three hours in real time at Ford Field in Detroit, Cleveland’s Brady Quinn and Detroit’s Matthew Stafford put on a show for the 43,170 people in attendance, as well as the many more watching at home. 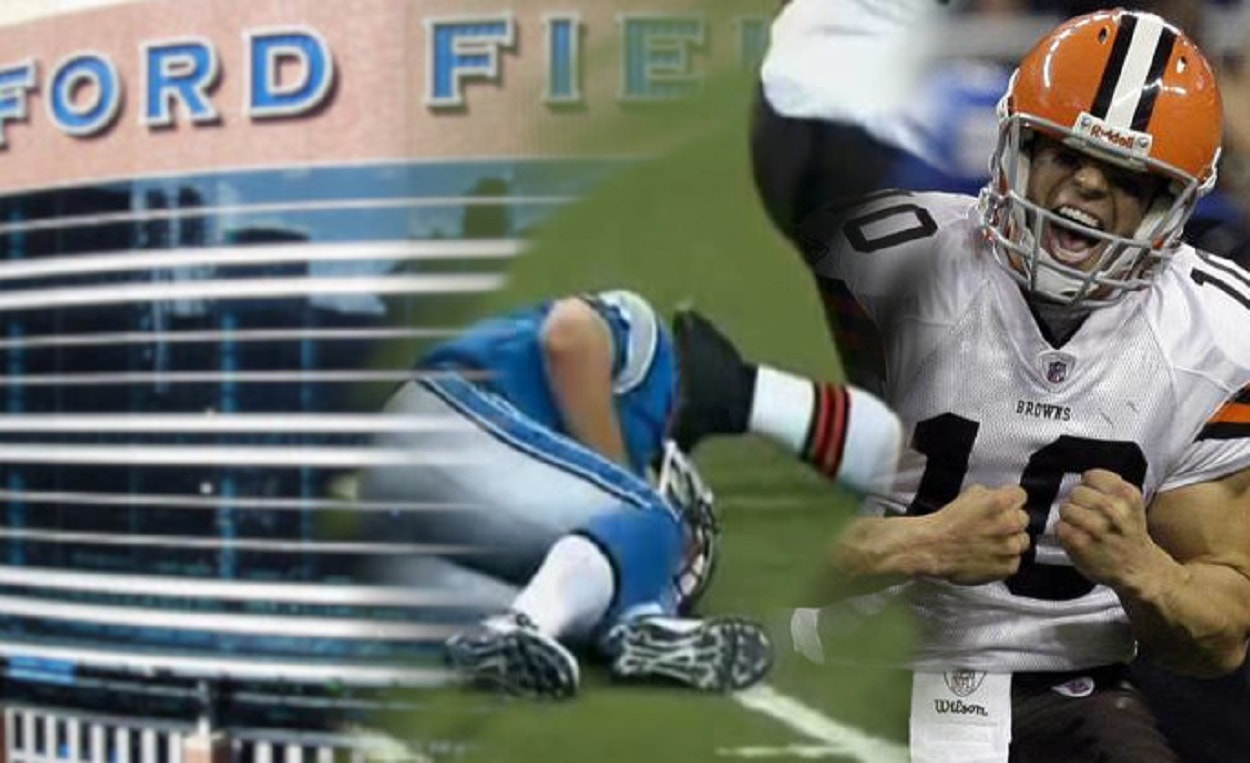 Matthew Stafford lays on the turf with a separated shoulder minutes before throwing the game-winning pass.
​Before the contest was over, the Lions’ rookie gunslinger, Stafford, had thrown for 422 yards and five touchdowns, while one-time savior of the Browns, Quinn, had contributed four touchdown strikes of his own and 304 yards through the air. As units, each team would put up over 400 yards of offense, convert half of their third down attempts, and convert three fourth down attempts between them. The final score would be decided by one point and came on the final play of the contest, with the winning quarterback who scored it doing so with his arm, literally, hanging out of it’s socket.
​The Browns, in their brown pants and white jerseys, would receive the kick-off and begin with the ball at the Lions’ 26-yard line. After feeling out the Lions’ defense with a run up the middle from Jamal Lewis, Quinn launched a pass down the left sideline for a 24-yard gain to wide receiver, Mohamed Massaquoi, and were quickly into Detroit territory. Although the drive would bog down ending with a 44-yard field goal from Phil Dawson, the Browns served notice of their intentions to air out the football. When the Lions received the ball following the kickoff, they equalled that notice.

Taking the snap, Stafford stepped into the pocket and quickly found running back, Kevin Smith, who had snuck out to the left of the backfield and would roll down the sideline for a 63-yard gain. Like the Browns’ drive, the Lions would ultimately settle for a field goal courtesy of Jason Hanson from 31 yards out. With a little over five minutes gone, the score stood at 3-3.

The Browns would begin their next drive from their own 41-yard line. Brady Quinn would fake a hand-off to Lewis which the Lions' linebackers and secondary appeared to buy into completely. He then proceeded to find Massaquoi again, this time for a 59-yard scoring strike and a quick 10-3 lead. 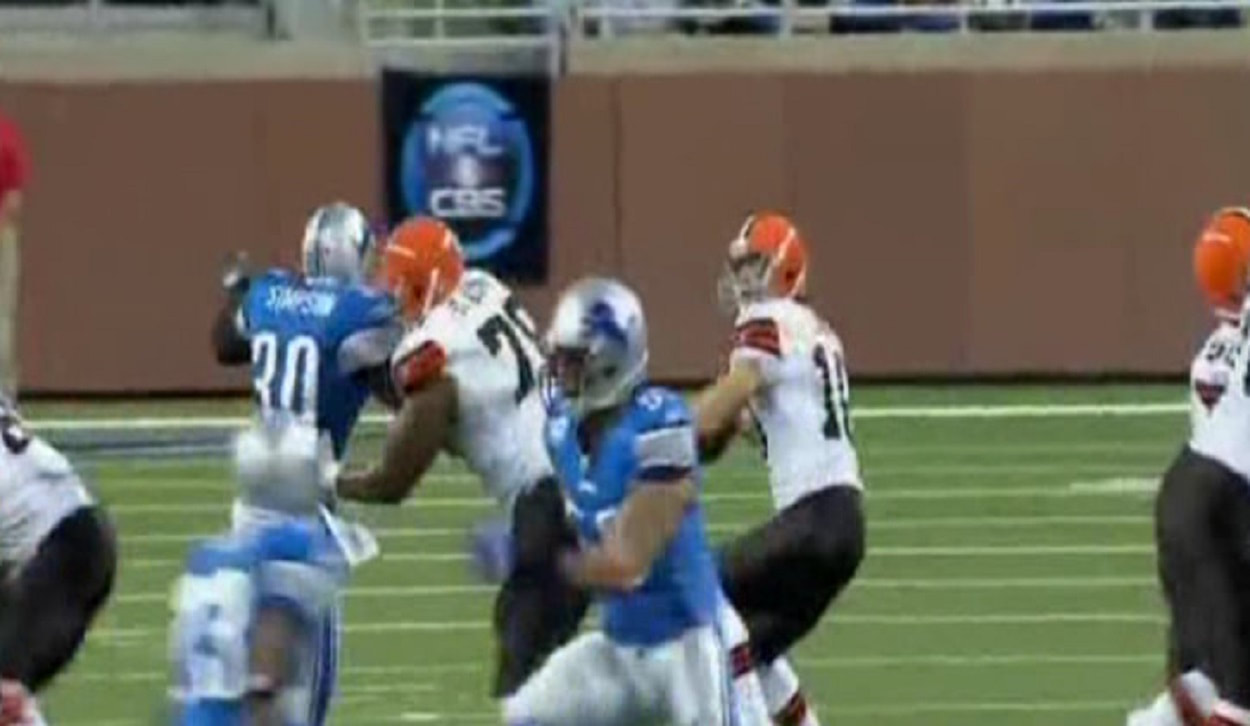 Cleveland's QB Brady Quinn launches one of his four TD strikes in a losing effort
Detroit would punt on their following possession. After chipping away with runs and short passes to the Lions’ 40-yard line, Quinn launched another scoring strike. This time receiver, Chansi Stuckey was on the end of it, and following the extra point, the visitors were suddenly fourteen points ahead, 17-3. CBS commentator Randy Cross would quip:

“This is unchartered territory for this passing game!”

Following an Eric Wright interception of Matthew Stafford on the Lions next possession, Quinn fired his third touchdown pass two plays later to receiver, Josh Cribbs. With a little less than three minutes left to play in the opening quarter, and with the crowd at Ford Field in shock, the Browns had taken a masterful 24-3 lead on the home side. Just to demonstrate how much of a shock this was, the Browns were averaging nine points in the first quarter coming into their tenth game of the 2009 season. ​

From the commentator’s booth, Cross would offer, “You can’t get twenty-one (points) in a hurry”. Stafford would have to “remain calm”. And before the opening quarter was through, Stafford offered a glimmer of hope for both his teammates and the fans in the stadium.

A pass to Brandon Pettigrew on either side of a Kevin Smith 11-yard run, followed by an incomplete pass to Calvin Johnson moved Detroit down the field. Stafford would then dump the ball off to Aaron Brown who took it into the end zone from 26 yards out. As the first quarter came to a close, 34 points had been scored as the 1-8 Browns led the 1-8 Lions, 24-10.

“What kind off odds would you have got for thirty-four points in the first quarter?” Cross rhetorically asked from the booth. ​
​​Stafford would lead the Lions to two unanswered scoring drives in the second period. And with each one, came not only the desperately needed points, but the returning cheers of the fans. The first drive ended with a 25-yard scoring pass to Kevin Smith, while the second was the result of a 75-yard laser strike to Calvin Johnson. With just over five minutes remaining in the first half, the Lions had leveled up the score at 24.

​Cleveland’s Brady Quinn would lead his team from their own 20-yard line to the Lions 11, and with only seconds remaining in the first half, Phil Dawson booted through his second field goal, making the halftime score, 27-24 in the Browns’ favor. While the scoring in the second half would be limited by comparison to the first thirty minutes, the excitement wouldn’t be.

Each team would move the ball temporarily on their opening drives of the first half but would each ultimately end up punting. On their second possession, Detroit, behind the guidance of Matthew Stafford, would methodically move the ball from their own 16-yard line to the Cleveland 1 before Stafford bagged his fourth touchdown of the game, this time to Will Heller.

A three-and-out by the Browns would give the Lions the ball at their own 2. A short run and pass interference penalty against the Browns moved the ball out to the 5-yard line. On the next play, however, Cleveland snatched momentum back when Stafford was called for intentional grounding in the end zone, resulting in a safety.

The teams would again trade punts in the opening minutes of the final period, before Brady Quinn led the Browns’ offense on to the field with 12:31 remaining in the game and trailing by two points, 31-29.

He would proceed to remove just short of seven minutes from the clock, and most importantly, with 5:51 remaining in the game, he fired the ball to Michael Gaines from 2 yards out, taking the lead, 35-31. Cleveland would attempt a two-point conversion following the score, an attempt that was successful courtesy of Jamal Lewis ploughing up the middle. The visitors had retaken the lead 37-31.

​While Stafford would begin to move Detroit following the score, his pass towards Calvin Johnson was intercepted in the end zone by Brodney Pool. The Browns would take over at the 20-yard line, and proceed to run two more minutes off the clock, punting the ball to the Lions who would take over possession at their own 12-yard line. Matthew Stafford ran on to the field once more, this time with 1:46 on the clock. What was about to unfold was the first indications that the Lions young quarterback truly had a stellar career ahead of him. 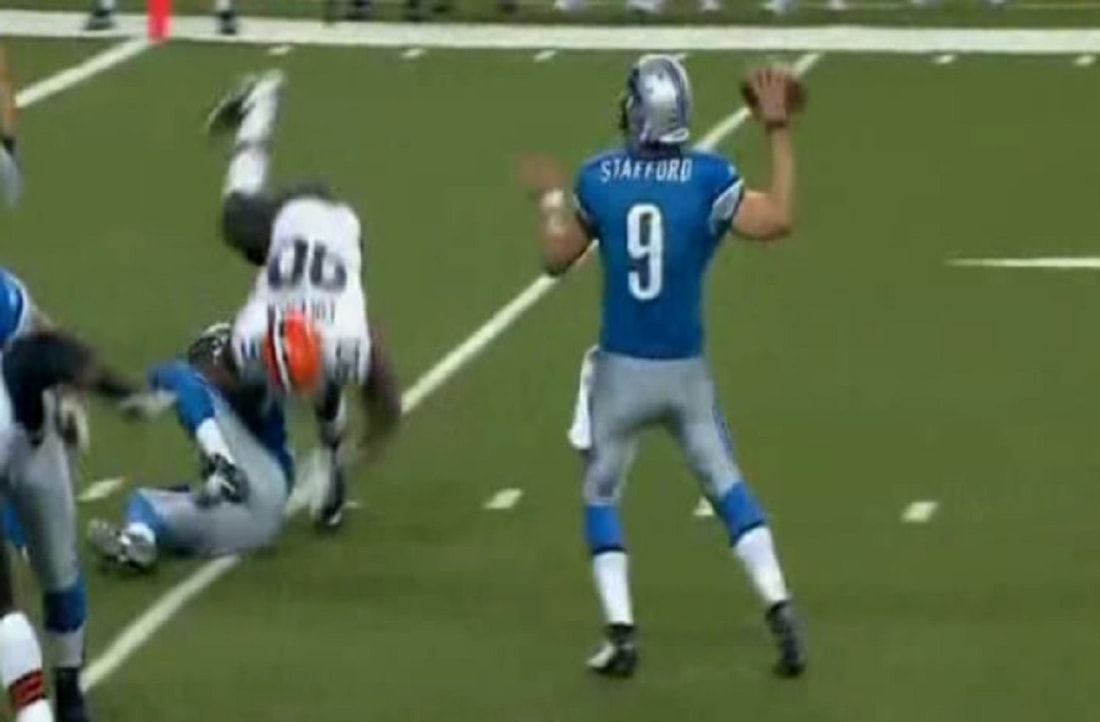 Detroit Lions' gunslinger, Matthew Stafford
​The rookie signal caller promptly fired passes of 13 and 17 yards to Calvin Johnson, with a 4-yard hook-up with Kevin Smith in the middle of them. Then, with forty-six seconds on the clock, Stafford spiked the ball and stopped the clock. On the next play he would pick out Brandon Pettigrew for an 11-yard gain before spiking ball once again.

Twenty-seven seconds on the clock.

Following an incompletion to Pettigrew, Stafford singled out Will Heller with the ball and another 11-yard pick-up. Once more, he spiked the ball, this time with his team at Cleveland’s 32-yard line and with only eight seconds on the clock.

On the next play, Stafford would scramble to the sideline to elude the Browns’ pass rush. He would then back track on himself and head back towards the middle of the field. The game clock declared three zeros and Stafford had only slightly more time than that before Browns defenders hit him. He fired a pass towards the end zone which Cleveland’s Brodney Pool intercepted.

Stafford was slow getting up.

There was, however, a penalty flag in the end zone. A foul was called on the Browns’ Hank Poteat for pass interference. This gave the ball back to Detroit at the Browns’ 1-yard line with no time left on the clock.

As the cameras went back to Stafford, it became clear to all, he wasn’t just slow getting up. He wasn’t getting up at all. Two Browns players had sandwiched him as he released the ball on the previous play. With his arm outstretched and vulnerable, he suffered a shoulder separation, not to mention a hit most of us would associate with a small vehicle collision.

The Lions still had the ball back, though, but with Stafford injured and requiring attention on the field, he would have to, by rule, sit out the next play. With the game on the line, Detroit would have to turn to their back-up quarterback, one-time Minnesota Viking, Daunte Culpepper and ask him to win the game for them, right there on his first play of the game! The odds were against Detroit. The Browns just had to hold once more.

Then, Cleveland called time out. 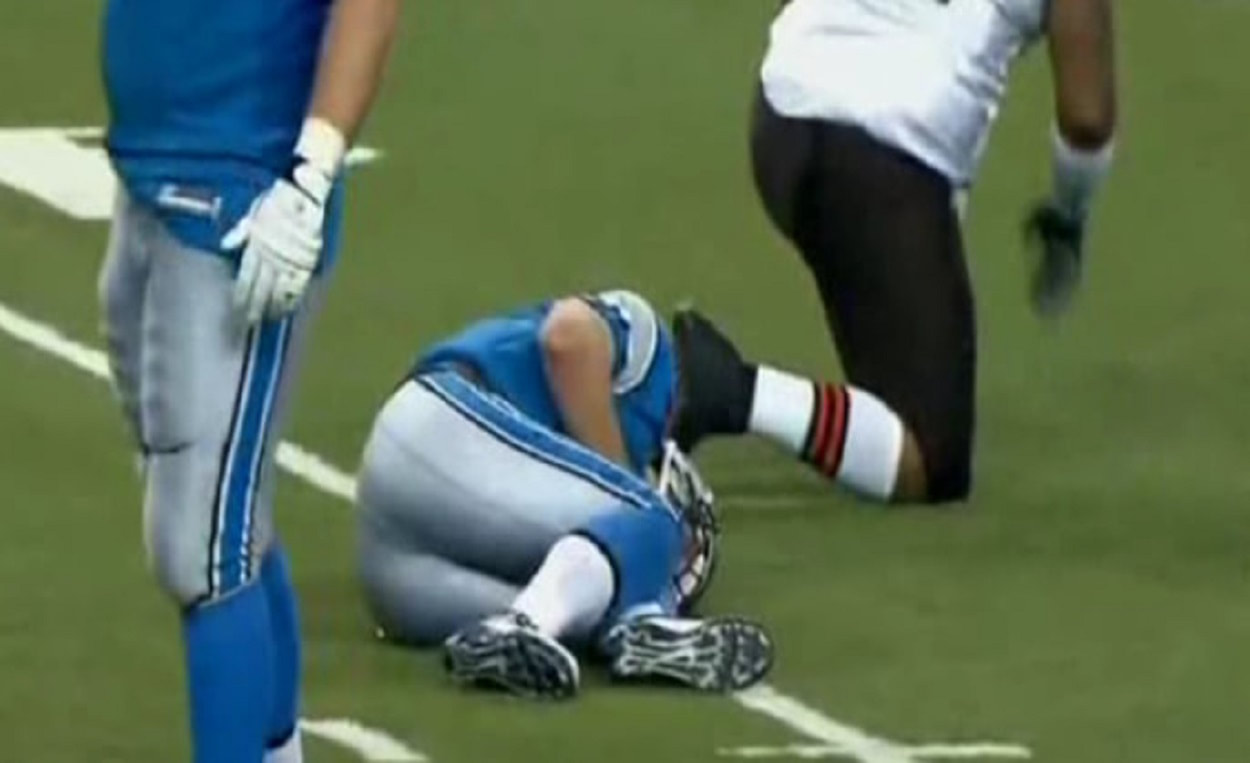 On the sideline, NFL Films would capture the moment Stafford, crippled by a separated shoulder, remained mentally alert enough to realize this meant he could go back into the game. “Hey, that’s a time out! I can play, right?” Despite protests of his injury by medical staff, he insisted and made his way on to the field to not only get the win, but the true confidence and belief of his teammates and fans alike.

With pain shooting down his arm, itself hanging limp, Stafford took the snap, took three steps back and forced the ball into the hands of Brandon Pettigrew. As he came off the field, his left arm pressed against his torso, he motioned to the sideline that he needed urgent attention.

“They did it! The Lions came back and did it!” announced Don Criqui from the booth.  The score was level at 37. Jason Hanson’s extra point broke the tie.

​The were just over 40,000 fans in Ford Field that afternoon. As the TV commentators thanked their audience for watching, it sounded more like 400,000. Among all of the chaos, and on top of the victory for the Lions, Matthew Stafford became the first rookie quarterback in NFL history to throw for five touchdowns in a game.

Check out the videos below. They feature some of the fan footage taken during this quiet NFL classic.